It is no news that the council have made a disrepair action plan after claims increased by 600%. The local authorities have said that claims management companies (CMC) now rely on disrepair claims to recover lost revenue during the COVID-19 pandemic. They claim that these companies initially focused on Payment protection insurance (PPI) claims, but have since turned to housing disrepair. 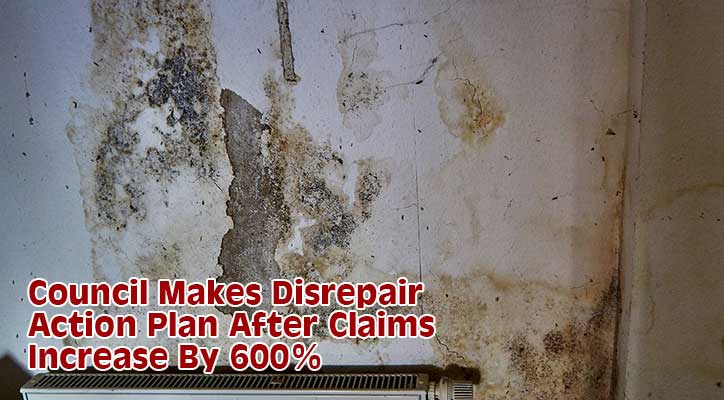 The increase in disrepair cases against the council has since been recorded as 6 times higher than it were 4 years ago. This has prompted the local authorities to make a disrepair action plan to help deal with the rise in cases.

The council has since resolved to use a more proactive approach in dealing with the surging disrepair claims, although it has caused them over £3m per year. It has partially blamed the claim management companies for contributing to the influxes.

It’s been observed that a little over 40 percent of the surging disrepair cases that have been brought to the Lambeth Council involve damp and mold problems. As at September 2021, the council recorded over 700 live disrepair claims compared to the number of cases that were reported in 2017. Almost 45 percent of these live claims have to do with issues relating to damp and mould.

The council further said that a huge percentage of the compensation that claimants eventually receive will go to law firms through no win no fee arrangements. Most social tenants are unaware of success fees when it comes to making no win no fee disrepair claims from claims companies.

Landlords are facing the rise in disrepair claims made through the 2018 homes fitness for human habitation Act. This new regulation was enforced in 2019 and the rules are stricter compared to older legislations like the landlord and tenant Act of 1985.

In the new home fitness for human habitation Act, a property that is considered safe or suitable for habitation has more stern requirements than other regulations. This has made it simpler for tenants who wish to take legal action against housing disrepair.

With these strict rules in place, councils often agree to resolve disrepair issues out of court. More claim companies are supporting tenant disrepair claims as most cases don’t go through court proceedings. According to a report yet to be released by the Lambeth Council’s housing scrutiny sub-committee, an average settlement for housing disrepair claims was about £6,500 in 2020, with over £2m paid out in compensation and legal expenses.

The process has been mapped out by the Lambeth Council’s disrepair project group. The action plan reviews and points out the disrepair claims process including the pre-action protocol.

With the new alternative dispute resolution method cases will be awarded to two lawyers who will review all cases by year end. The team will also head the settlement scheme as the council is set to launch about £120,000 to review 120 claims. Under the new claim process, the council has estimated that about £3,000 will be allocated to each case, unlike the current average payout which costs about £6,500 per case.

The council has also put further actions in place to develop a new strategy to prevent disrepair. This maintenance programme will also help to speed up the process of carrying out repair work for affected residents.

The report also said it is adopting a more proactive approach to selling properties occupied by homeowners. Below are some other plans of action by the council to minimize the increase in disrepair claims.

The council has therefore put a lot in place to limit disrepair claims, but sometimes they may miss out on some major repairs that may lead to disrepair claims. Tenants who are still facing disrepair problems may decide to take legal action against their local authorities or housing association. To learn more, call the housing disrepair helpline to speak with no win no fee housing solicitors today.